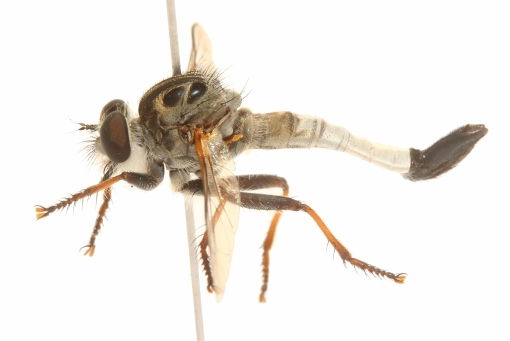 Male Efferia exaggerata recently described from Sint Eustatius.
/ Foto:
John Smit
Recently a paper was published with a new robber fly species from Sint Eustatius: Efferia exaggerata. The species-name refers to the extremely large terminalia, which, in flight, the male appears to drag behind him. There was one other species of Efferia known from the Lesser Antilles: E. nigrimystacea, which was encountered on Sint Eustatius as well. Furthermore several specimens of the species Ommatius prolongatus were found on the island, which was only known from a single female described from Montserat. In the present paper the male is described as well. With these three species newly recorded from Sint Eustatius, a small contribution to the knowledge of the biodiversity of the Dutch
Caribbean.
Bron
Smit, J.T., 2019. Robber flies from Sint Eustatius, Lesser Antilles, with the descriptions of Efferia
exaggerata sp.n. and the male of Ommatius prolongatus Scarbrough (Diptera: Asilidae). Zootaxa
4586(1): 141-150.